The unique UKLA Book Awards are the only awards to be judged entirely by teachers who are looking for texts that can “enhance all aspects of literacy learning”.The process ensures they are able to share the books with their classes and discover what genuinely works with young readers in each of the three age categories and so their judgements are soundly based on pupil response.

The unique UKLA Book Awards are the only awards to be judged entirely by teachers who are looking for texts that can “enhance all aspects of literacy learning”.The process ensures they are able to share the books with their classes and discover what genuinely works with young readers in each of the three age categories and so their judgements are soundly based on pupil response.

For an unprecedented second year in a row the 3-6 category has been won by Morag Hood. She said “I am so honoured that I Am Bat has been chosen as the winner, and to win for the second time is just incredible! What better accolade than from the teachers who know and understand children the most. It fills me with joy to know that my little bat is being used in classrooms and, I hope, helping to encourage a life-long love of reading.” Costa prize winner The Explorer by Katherine Rundell took the 7-11 categorydemonstrating mass appeal and beautiful writing can go hand in hand. The verse novel Long Way Downby Jason Reynolds which was also shortlisted for this year’s Carnegie Medal, won the 12-16 category.

Equally unprecedented was the fact that the judges, after intense debate, decided to award a Highly Commended in each of the three age categories to books that were very different but equally valuable and too good not to be specially recognised. So the Newbery Medal winning After the Fall by Dan Santat has been Highly Commended in the 3-6 category withS.E Durrant’sRunning On Empty in the 7-11 and Carnegie medal winning Elizabeth Acevado’s verse novel The Poet X in the 12-16. With two verse novels triumphing in this category alongside the CILIP Carnegie win and National Literacy Trust research showing the popularity of poetry with young people, this is a triumphant year for the genre. Shortlisted Sarah Crossan was the first UKLA winner with the verse novel format with her debut The Weight of Water in 2013.

The 2019 awards were presented at a special ceremony on July 12th at the UKLA International Conference, Sheffield Institute of Education, Sheffield Hallam University. Student teachers from 20universities around the UK take part in Shadowing the awards and read and use the shortlisted books on teaching practice in schools before having their own online vote to select their own winners. Mini Grey‘s The Last Wolf was the 3-6 winner and S.E Durrant’ Running on Empty won the 7-11 student vote too. The National Education Union sponsors studentshadowers to attend the conference and they also announced and presented their awards at the ceremony.

10 teachers nominated from the 58 involved in the shortlisting, who came from Midlands region around Sheffield, formed the final judging panel and had the challenging task of reading all the shortlisted books in all three age categories, which meant nursery teachers reading fiction for teenagers and secondary teachers reading picturebooks!

For UKLA, giving classroom practitioners the opportunity to read a number of new quality children’s books is as important as finding an overall winner. Research carried out by members of UKLA (Cremin et al 2008) clearly demonstrated the links between teachers’ knowledge of children’s books and the likelihood of pupils becoming successful readers. Despite this evidence, teachers are seldom given time to read new books or funding to purchase them when they do. As Awards Chair Chris Lockwood said: “As predicted the final selection in June was extremely difficult, but it was a pleasure to work with such a committed, creative and insightful group of teacher judges to come up with such outstanding winners.”

‘LoveReading4Schools and its sister site LoveReading4Kids are delighted to again support the UKLA Book Awards in 2019. In the 9 months we have re-launched both sites and they continue to go from strength to strength. Adding 100 schools a month as members to the LoveReading4Schools site, it’s exciting to see the impact we are having and support we are delivering to teachers and school librarians, helping them engender that lifelong love of reading in their students.

The fact that the teacher judges reflect on their students’ responses to the books gives these Awards huge credibility and trust so that schools know the books will be in turn loved by their own pupils. The awards are equally valuable for parents looking to support the school environment and further encourage a love of reading at home.’

Tracy Parvin, President of UKLA said ‘We know that literature broadens the reader’s experience and understanding of the world, it also enables children to walk in the shoes of others and to question and explore infinite possibilities. Reading should therefore have a central place in classrooms and in all educational contexts. Children need access to a rich range of high quality literature and our awards over the past ten years have highlighted some of the very best literature available to children and young people in the UK. We are proud to be celebrating all these truly outstanding winners at our International Conference ‘

The winning book in the 12 to16+ category is Long Way Downby Jason Reynolds illustrated by Chris Priestley. Published by Faber& Faber

Written in free verse, this is the story of a 14-year-old boy whose brother has just been shot. The boy takes his brother’s revolver and makes his way down the lift shaft to seek vengeance. On every floor he is to experience ghosts of family members who tell their stories. Will he ’Follow the rules’? Haunting and utterly compelling. Judges found a “Powerful and brilliant narrative structure”that was yet“so simple and accessible” and a book that has “reached boys who never read.” A book that reflects young people’s reality. “A book that can save lives.”

Highly Commended in the 12-16+ category is The Poet X by Elizabeth Acevedo. Published by Egmont, Electric Monkey

This poignant verse novel is told in the voice of Xiomara, a young girl trapped in a family controlled by a fierce, church-going mother afraid of her daughter’s growing sexuality. Xiomara is rescued by her brother, who gives her a notebook to write down her thinking, and her teacher who encourages her to join a slam poetry club. It’s through this club that Xiomara gradually finds her own voice. Judges found “Themes that are really relevant and applicable to all young people with redeemable complex male characters as well as a powerful female role model.”

The winning book in the 7-11 category is The Explorer written by Katherine Rundell and illustrated by Hannah Horn. Published by Bloomsbury

A small plane crashes in the Amazon jungle and four very different children have to survive and find their way to people who can help them. When they see signs that someone has been there before them, they follow the clues and find something unexpected and wonderful. The unforgiving beauty of the Amazon is meticulously depicted in a way which augments the story. Readers will love the passion of the writing and the respect for childhood. Judges were impressed by the portrayal of the “group dynamics and sibling relationships of the children” and liked that they “are agents of their own success” and are particularly well evoked through dialogue which “shows rather than tells.”

AJ doesn’t think he’s really a carer for his parents, both of whom have learning difficulties. The most important thing in his life is running and, living very close to the London Olympic Stadium, he dreams of emulating Usain Bolt. When his grandad dies, AJ has to takes more responsibilities and make some very difficult decisions. This entirely believable story of friendship grips readers from the first page right through to the inspiring conclusion. Judges commented that “boys were able to emotionally engage” with the character and situation. “Animportant empathetic read.”

The winning book for the 3 to 6 category I am Batwritten and illustrated by Morag Hood. Published by Two Hoots

Bat loves cherries and warns all unseen potential thieves that they must not take them. When some cherries are stolen, Bat is bereft until friends provide a different fruit. Bat is a wonderful character in whom children will find some recognisable characteristics: but not their own, of course. What could be better than to see that others can be fickle, obsessive and foolish yet still lovable? I Am Bat gives more on each rereading and the judges delighted in the “cleverly written direct address to the reader” which“comes alive when read aloud and shared”. Enjoyed from Foundation to Year 6 and beyond!

Highly Commended in the 3-6 categoryAfter the Fallwritten and illustrated by Dan Santat. Published by Andersen Press

There are some things that all the King’s Men couldn’t mend for Humpty Dumpty. He is now terrified of heights, yet he misses the view from the top of the wall so much. Perhaps sending a paper plane flying over the wall might help? But the paper plane gets stuck and Humpty must decide whether he is brave enough to climb the wall to rescue it. This is a breathtakingly accomplished fusion of words and illustrations with plenty of humour and a huge impact. Judges appreciated how well it “Inspires inference and empathy” with an“important message of resilience and determination.”

After the Fall written and illustrated by Dan Santat(Andersen Press)

PrevPrevious StoryCall for more and better “play” for adolescents
Next Story​Digital media: a powerful tool to support literacy educationNext 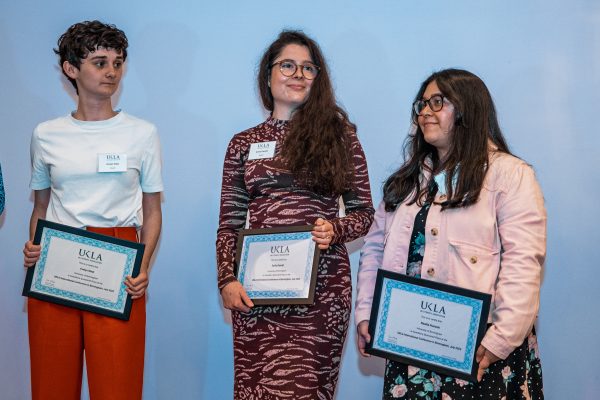 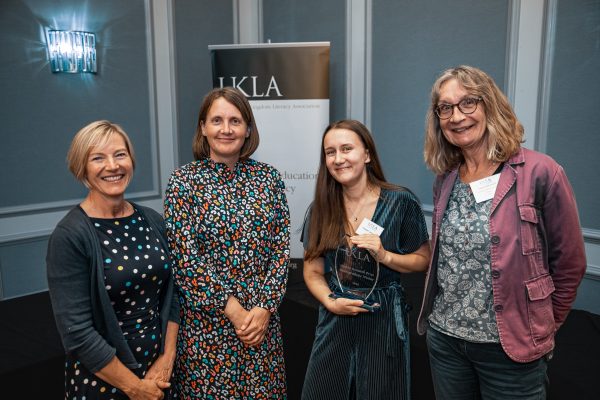 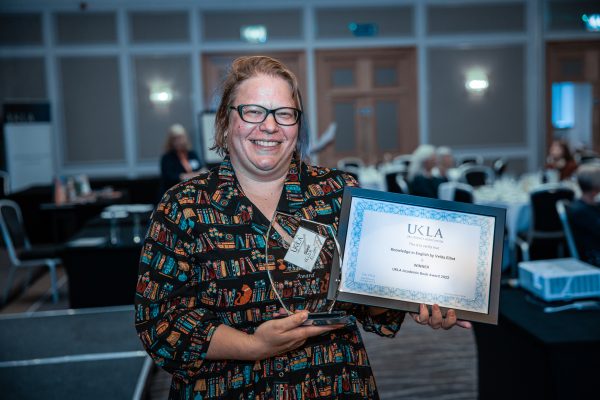